The Presbytery of the Genesee Valley has several designated validated ministries, that is, programs or organizations run by teaching elders and receiving some oversight or support from the presbytery. The Protestant Chapel Community at the University of Rochester is one such ministry. For the next several months, The Messenger will feature these validated ministries in turn so that Third Church members can learn about, or get a refresher on, the work being done outside and in between churches in our presbytery. 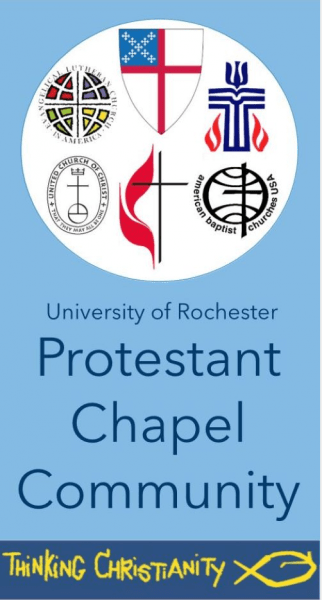 In 1964, Genesee Area Campus Ministries was formed through the efforts of the then-Rochester Council of Churches, as a covenant partnership of the Presbyterian, United Methodist, Episcopal, American Baptist, and UCC denominations. Ever since, GACM has supported a mainline Protestant “church on campus” at the University of Rochester. The Protestant Chapel Community (PCC) provides undergraduate and graduate students at the U of R with a full range of service, fellowship, worship, and study opportunities. These include Sunday worship, Wednesday “Dinner Dialogues,” and Saturday student-led Bible studies. Past service projects have included making blankets for Mary’s Place Refugee Center, painting at the ROC SALT Center, and raising money for world hunger relief.

Third Church member Gabi Henry, who is now in her/their first year at Princeton Theological Seminary, was active in the PCC while a student at the University of Rochester. Gabi said, “I appreciated that the PCC provided us with a space to have a mainline Protestant worship service and community right on campus . . . Most of the Protestant campus groups that I’ve encountered have been evangelical groups, therefore not something I personally would have much to do with. Being a part of a truly progressive and welcoming on-campus faith community was invaluable to me, both as a student and as a Christian.”

Presbyterian Teaching Elder Laurie Tiberi, director of the PCC, has worked full-time as a chaplain on campus for 15 years. Gabi Henry said that chaplain Laurie Tiberi was “great at providing spiritual guidance and pastoral care, while also sharing her wealth of knowledge to help us learn more about our faith and the world.”

Like Gabi, Nicole Fleming came to Third Presbyterian Church after having been active in the PCC as an undergraduate student. Nicole praised the openness of the PCC; she remarked, “The first service I went to . . . was the first time I’d seen a religious leader admit to not knowing everything, and maybe not having the ‘correct’ interpretation. It meant a lot to know that no one has it all figured out.” She added, “I had never seen people debate the Bible before college. There was discussion at my home church, but everyone had (or at least said) the same opinion. It was so beneficial in my journey from church kid to Christian adult to be able to take risks and interpret passages in a safe environment, where people can disagree.”

To learn more about this ministry, go to: https://www.protestantchapelcommunity.org/