Baton Rouge, LA — 7.1 trillion gallons of rain fell over the course of four days in southern Louisiana late this summer – covering half of the geographic area of the state. Massive flooding ensued in places that had never flooded before. 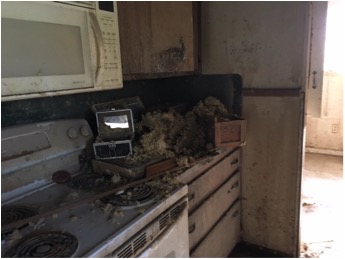 Debris in kitchen after flooding

That’s in part why several of us are here in Louisiana this week. We joined with fabulous folks from Nechamel, the Jewish Disaster Response organization, as well as Americorps, and have been completely gutting a home in the Baton Rouge area – a home that even though it was on a hill, still filled with water up to the attic. Every piece of drywall, every fixture, every appliance, every cabinet, every piece of insulation, absolutely everything comes out except for the studs, the brick exterior of the house, and the tile floor.

In addition to the flood devastation, the homeowner’s husband died in June, and she’s suffered broken ribs since the flood. Her daughter stopped by to say a heartfelt thanks to the group for being here. We walked into a convenience store with our disaster recovery t-shirts on, and strangers said thanks for being here.

A neighbor stopped by to bring us cold drinks. She’d raised her house 20 years ago, high enough that the flood waters didn’t reach her main floor. Still, she told of how she had to escape her home in a boat.

The storm may have no name, but its devastation is real and extensive. And every pry of the crowbar and every shovelful of debris hauled away brings just a little bit of hope.