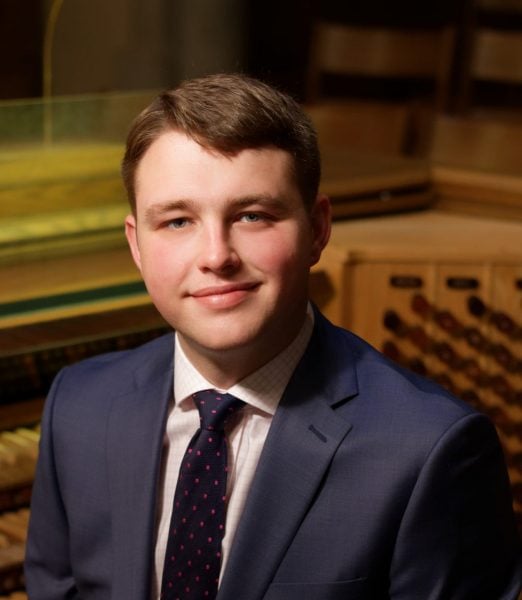 James Kealey is Associate Director of Music/Organist at Third Presbyterian Church in Rochester, NY. In this capacity, James is the primary accompanist to the Chancel Choir, as well as having service playing duties, and oversees and coordinates children’s music ministry, including several vocal and bell choirs. This fall, James will begin his candidacy for the Doctor of Music Arts degree (part time) at the Eastman School of Music, Rochester, NY in the studio of Prof David Higgs.

In the spring of 2020, James completed his Master of Music degree from Eastman in Organ Performance and Literature. Alongside studies, he was Music Minister at Church of the Ascension (Episcopal) where he oversaw the senior choir, youth choir and began an arts festival each spring. A native Brit, James came to the USA having held positions at Chester, Blackburn, Wells and Sheffield Cathedrals. On Easter Sunday 2018, James played the Cathedral Eucharist on live BBC 1 Television to an estimated 1.5 million viewers from Sheffield Cathedral.

James received his undergraduate degree from Royal Holloway, University of London, and worked as Senior Organ Scholar to the renowned Chapel Choir in their series of live broadcasts, international tours, CD recordings, and weekly services and concerts.

Other professional affiliations include the Rochester AGO, where Mr Kealey is the Dean for the 2021-22 academic year, and the Organ Historical Society, where he was a member of the Task Force for the 2021 Virtual Convention, Kaleidoscope of Colors.

Honored as one of the ‘20 under 30’ by The Diapason, an accolade awarded to some of the most successful artists in the field, James has performed extensively in England, the USA & Europe. Most recently, James has performed at Westminster Abbey, England, St John the Divine, NYC; and Hereford Cathedral. Future recitals at home and abroad include; St Philip’s Cathedral, Atlanta, GA; Church of the Covenant, Cleveland, OH; Wells Cathedral, England; and a recital as part of the Organ Historical Society’s Annual Convention in Columbus, OH. James was recently placed as a semifinalist in the American Guild of Organists National Young Artists Competition in Organ Performance (2020).