As part of Third Church’s continuing anti-racism efforts, the Adult Spiritual Formation Committee is sharing reviews of books about race and/or by BIPOC authors. If you would be willing to write a brief review of a book that has opened new perspectives to you, please contact Becky D’Angelo-Veitch. 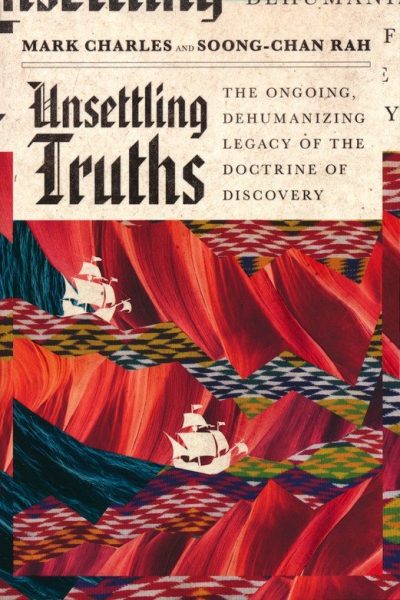 Unsettling Truths: The Ongoing, Dehumanizing Legacy of the Doctrine of Discovery by Mark Charles and Soong-Chan Rah

In the mid-19th century my great-great-grandparents moved from eastern Germany (then Pomerania) to present-day Romania/Moldova to establish communities for German Baptists. About fifty years later, his entire clan moved from their tiny village on the shores of the Black Sea to the prairies of the Midwest. In 1898, my great-grandfather Thomas Lutz received 160 acres in Carrington, North Dakota, through the Homestead Act. Per the government mandate, he dug a well and began cultivating the land, to “improve” it.

I’d like to think that Thomas Lutz understood the social and political context in which he was inserting himself. I’d like to think that he was empathetic to the plight of the Native peoples, or that at the very least he was wholly ignorant that he was co-opting the land of others. But I’m not sure that he did, and that’s hard for me to accept. While I have no historical proof of his motives, my hunch is that my great-grandfather—a man of stalwart faith, who had planted and pastored many churches in South Russia—saw only continued opportunities to plant more churches and bring his faith to a new continent.

The book Unsettling Truths: The Ongoing, Dehumanizing Legacy of the Doctrine of Discovery by Mark Charles and Soong-Chan Rah traces the origins of the Doctrine of Discovery from an edict by Pope Nicholas V in 1452 to the notion of Manifest Destiny to the New Jim Crow. The Doctrine of Discovery actually has its origins in the philosophies of early church “fathers,” who helped to normalize the notion that “exceptional Christian rulers governing the City of Man could operate in violence and war as long as they had the support of the church” (64-65). Over time, European (white) supremacy became bound up with evangelism; by converting “savages” to Christianity, Europeans could “civilize” them. The mode or method of that conversion was inconsequential; what mattered was creating “the kingdom of God on earth.”

That is unsettling enough, but it gets even trickier for me:

In the mid-1930s, my grandfather Frederick Lutz came to Rochester with his younger brother Gustav to study at the Rochester Theological Seminary, which for many decades had a German-language division. Fred never finished seminary, but Gustav graduated and obtained ordination in 1940 and served a short time as the pastor of a small Baptist congregation in northern New Jersey before he voluntarily enlisted in the U.S. Army as a chaplain. Tragically, Gus was killed in April 1945, just weeks before the cessation of the war in Europe, at the Battle of Remagen in Belgium.

As first-generation German-Americans, my grandfather and his siblings were avowed anti-Nazis. They clearly saw Nazism as a bastardization of the ideals of Christianity, and they had no trouble reconciling their heritage and their nationality because they understood that God had brought their family to North America for a particular purpose: to spread the Good News and win souls for Christ. They worked hard to embody every American virtue, which included volunteering for national service to fight the forces of evil.

My grandfather would be horrified if confronted with the brutal statistical reality that the war of discovery—which essentially brought his family to the U.S.—has a whopping 96 percent rate of genocide, whereas Nazi Germany had a genocide rate of 35 percent for Jewish people (p. 162). If my grandfather and great-uncle Gus had known that they were a part of a genocidal process far larger than the Final Solution, they would be heart-broken. They saw themselves as God’s freedom fighters, and Gus as a kind of sacrificial lamb to the greater cause of restoring justice. This, quite frankly, upends our family’s narrative as being a part of God’s plan for the greater good.

Faced with the enormity of this realization, that I hail from people who benefited directly from the subjugation and destruction of others while at the same time heralding themselves as holy warriors, I don’t quite know what to do. This discomfort is precisely the goal of this book; the authors ask us to come to terms with the bad theology that has brought us to where we are today. As faithful Christians, we all need to interrogate our genealogical narratives and come to terms with our individual culpability in a larger framework of collective sin. That starts by heeding the call to humble ourselves and lament, because “without lament, human effort and human success emerge as the driving force in the activity of the church” (p. 9).