As part of Third Church’s continuing anti-racism efforts, the Adult Spiritual Formation Committee will be sharing book reviews on books about race and/or by BIPOC authors. If you have read a book that has opened new perspectives to you, and that you would be willing to write a brief review of, please contact Becky D’Angelo-Veitch. 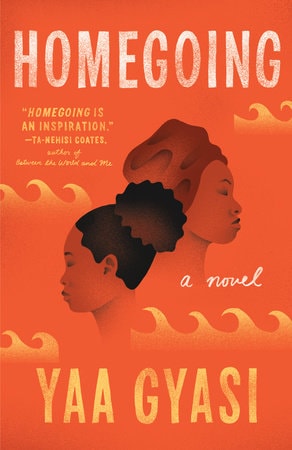 Homegoing was published to great acclaim several years ago. It tells the story of two step-sisters born in Ghana during the late 1700’s. One of the sisters marries a white British officer and goes to live in relative luxury in the Cape Coast Castle. Her step-sister is captured, held in the dungeon below the castle, sold into slavery, and shipped to America.

The novel unfolds in a series of linked short stories following the descendants of the two women through seven generations—those living in Africa and those living in the United States. Their stories combine to present a harrowing and devastating picture of how systemic racism came to be enshrined in the United States. Yet it is not a novel without hope or beauty.  Gyasi’s writing is lyrical and brings each character to life. Dreams and conversations link one story to another.

Yaw, a descendent in the 20th century, becomes a history teacher. In discussing how to interpret history he tells his African students:

We believe the one who has the power. He is the one who gets to write the story. So when you study history, you must always ask yourself. Whose story am I missing? Whose voice was suppressed so that this voice could come forth? Once you have figured that out, you must find that story, too. From there, you begin to get a clearer, yet still imperfect picture.

Homegoing lifts the voices of those who have been suppressed so that we can hear them more clearly.